The Eye should forget the Word. Topos of its own, U-Topos and language, to the visual you are subdued. Proof: without figurative or narrative.
Aware of the content of the vow in front of the Modernisme effort, I let myself be driven by the story. It is the story itself wich taught me to distinguish the shape.

My retina was troubled by the strong, hazy emotion incited by the perfect rigidity of the vertical columns of the Picture Gallery in Munich, by the deserted glitter of the pavement and by the stairs claiming to be descended in order to reach the door wich disclosed the perspective. Tiny and unimportant, the door should have led to another realm.
Overlaping the image of another perspective in wich the verticality of the trees were protectively pacing the connection between heaven and earth, where the desert was not menacing and unpredictible, I discovered what could be the realm from behind the door, or better, what could have been behind it, to make me happy. And then, I started telling how the clouds take the ceiling with them, howhow the craggy verticals of the trees tame those of the windows and finally, how the heavy, respectable nature of the stone turned into geometry becomes soft paste, troubled the decision to unsettle and recovers from the feeling of certainty and steadiness, subduing to the unalterable laws of the clouds wich promise more than to be irresponsible wreathed in an unresponsive, continuous dissolution and unstable being. 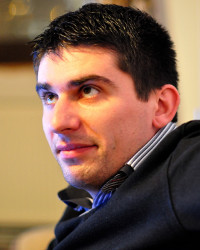