Us and the World

My interest for the relationship between the human being, the social environment, nature and the spiritual sphere includes visually investigating dynamism and the light and shade contrast. These represent the basis for a series of paintings using the arrow as central graphic element. The light and shade contrast is reinterpreted, allowing transpose the concept of “chiaroscuro” into the relation between order – disorder and legible – illegible. These works refer to the social environment as an aggregate of individuals and groups, marked by various influences. In the meantime, the human being appears also as a person, characterized by the sentimental world acting both inside and outside him. The arrows catch or draw lines that might represent individuals, groups, moods, feelings, influences and elements belonging to the social and natural environment. These shapes represent active vectors in the make-up of reality and, by means of the graphic sign, of the image.The moving points turn into lines and directions, providing a visual space filled by a network of runs generated accordingly. This structure represents a reflection upon reality and the graphic sign, the arrow, at a conventional level, is an individuality. Connections between the arrows exist and the space of the work is not limited to the convention illustrated by the graphic sign. It continues, maybe infinitely, with the suggested and hinted space 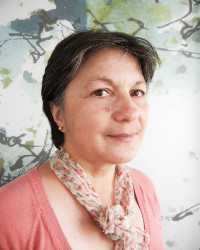