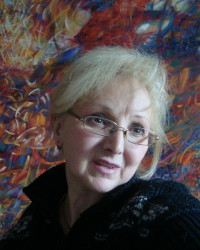 “Thus,the dynamic of her metaphoric word fulfils itself also as space of the human being initiation in the search for itself by the denial of the dissolution,the biologic,the accidental and the assertion of true experiences in the area of the Sacred or Creativity.

Thus,step by step,we witness by images the demystification of her inner universe in which the burning of the Christian belief is the defining support of her becoming.

In the most recent exhibitions(Excelsior and Hypostases of the Ego)we witness a sublimation of the vital under the imperative of a veiled geometry, the rethinking of genres,the signes of the triumph appear as inward seasons,and the forms remind of magnificent space,undulated,intersected,sometimes of rhytmic fractals inwhich the height-that of a flying berd-may be conceived as axis-mundi.

Margareta Catrinu also proposes a mythos which convers in image the creation process itself,aiming at the origins of the cosmic creation and the universal germination.

From here the return to the solidity of the stine allied with the vegetal launching of the chromatic surfaces,the organic softness, the poetry of modulating the touch of color…