THE EMERGED SHAPE AND EQUIVALENT MEANING

In the artistic landscape of Timisoara, any new name appearing in the professional field of textiles has become such a rare thing that the exhibition proposed by Hedy M-Kiss directly receives the status of an unbeatable exception. Besides, for Hedy M-Kiss too, practicing the textile art represents a real performance. The reason, of course, lies in the great propensity that she shows for practicing art, in the predispositions which she holds and which are open to an outstanding path of creation.
This personal exhibition, generically entitled “TEXTILE EXPRESSIONS” contains several methods, and execution techniques, but it is worthy to note the circumstance according to which the pure and clear artistic approach is felt in the same way, both in the overall understanding of the artistic nature and in the quality of details, and in the execution ability. The tapestry presented benefits from a correct tight and neat weaving (Genesis, Life Knot, Spirit and Matter, Sign, Darkness and Light), and the textile collage owes its success to the clear forms and firm cuttings (The City, Pavement). The printed pattern maintains a rich imaging on the broad, complex chromatics, preferring contrasts (cycles of seven works, Knots and Ropes, Sound Signs) while paintings show angular, slowly rhythmic spatial structures.
Each of the techniques used give a special attention to the quality of the material, but each technique succeeds in offering the material a particular expression which is necessarily open to meanings and significations.
Because in this artistic field terms like canvas terms, weaving, sewing, warping are actual, physical activities, they also have the privilege to be generously functional scaffoldings in the cultural translocation, by association with the myth following the weaving-foretelling pattern. It is this need to engage the artistic shape in an intended direction of communication that makes the works executed by Hedy M-Kiss to immediately offer themselves as justifications, on the one hand, as power of expression, on the other hand, and as plausibility of signification. Somehow, midway between Penelope’s canvas and the veil of Iris, somehow between the spider web weaving and weaving a destiny, between weaving a tall tale and the Gordian knot, between Ariadne’s thread and the ball of life. More precisely, between the quality of the textile material and the image it can form, between the emerged shape and the equivalent meaning. 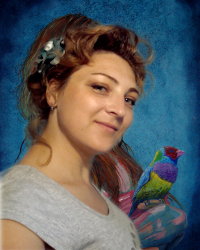