Screen printing is generally considered a two-dimensional printing process. By using this technique you could transpose on a flat surface texts, vectorial imagies (shapes with accurate outlines), illustrations and bitmap images (compositions of circles with various size).
The Portable 3D Screen printing Kit proposes a set of solutions to improve the serigraphic screen.
The solutions are represented by two functional prototypes from printing on three-dimensional sufaces. The frame’s anatomy is explained by technical drawings.
In the first part of the publication it is shown the steps to manufacture the 3D-Screen printing kit, from the frame to the exposure of the serigraphic film.
In the second part, it is displayed how the prototypes work throughout a series of 24 experiments regarding printing on different shapes and surfaces, using different serigraphic inks. All the documentation photographs are made by Nikita Dembinsky.

Henkan Grotesk is an experimental variable font. Its cre- ation was built on the dynamic relation and correlation between the digital and real world. After being designed in the digital realm, each of the lowercase, uppercase letters and numbers were laser cut from black paper, becoming physical objects. The paper glyphs were sub- ject to all sorts of experiments including burning, chew- ing, shredding and folding to change their initial state.
The resulting shapes were then scanned, being rein- troduced into the digital world where they were initially created. The next step was transforming them into vector shapes and then building a new set of alternatives to the initial type set for its future interpolation. Now the font has organically evolved into a variable font with the abil- ity to seamlessly shift between its initial and the altered form. The resulting forms highlight the contrast between the digital precision and the unpredictable, random ele- ments of the real world.
Each letter is unique in its own way because each one had to go through a different process in different condi- tions. The experiments showcase resulting forms with various states of alteration. Henkan Grotesk is a versa- tile sans-serif that offers a wide range of visual solutions to all users. 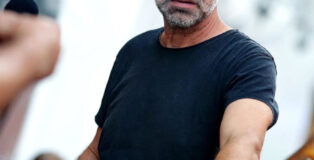