,,… The distinctive touch of  Sorin Nicodim’ s explorations in ,say , post-abstract manner , consists in the rapport between form and content , between ,,pure ,, painting and representation . The return to ,,motif,, does not mean that
Sorin Nicodim revisits deliberately , be it warily , the canons of the figurative . The painter always observes a ,,right
mediation ,, between the illusion of painting and its reality .,,

,,…. For SORIN NICODIM , of all his generation’s  fellows , has a propensity to wards that certain dimension of transparence belonging to certain symbols,to a nature but also to a culture which are intriguing through their mystery,
in the universal life chain ,originally reflected by an artistic consciousness which is mobile , creative and resourceful ,
while also remaining true to a lyric temperament not excessively expansive , but tranquil and tender . The nobleness of
NICODIM’s  painting dwells in the intellectualizing penchant , in organizing it into plastic concepts and meditations ,
which is does not spoil the poetics of the artworks .,, 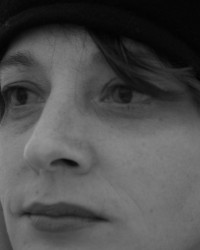